So Who Exactly Is Kirk Elliott?

For an event as important and as special as your wedding photography, a photo tour or any other type of photography far away from home I’m sure you want to know just who you’re dealing with.

So on this page I’m gonna share with you just who Kirk Elliott is.

How I Got Into Photography

My 1st Camera Was A Kodak EK6 Instant Camera… 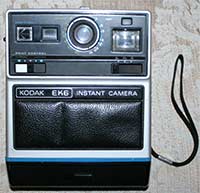 I got that camera back in the mid 1970s when I was 12 and I haven’t stopped making pictures since.  Heck that’s almost 40 years of pictures and I’m just as amazed today at what I can create with my camera as I was back then, which really doesn’t seem like all that long ago.

My Uncle Tony was home for his usual Christmas holiday when he gave me his old EK6, having upgraded to a newer model.  Well that was one of my best Christmases ever as I was all over the place shooting pictures and wowing my friends with the sound of the camera as it ejected the picture and the magic of watching the image materialize right before our eyes.

I was the star of my neighbourhood that Christmas and the feeling was intoxicating.  But alas my stardom didn’t last very long as my packet of film quickly ran out and there was no place in St Lucia to buy EK6 film.

So I had to wait until Uncle Tony got back home and mailed me some more film and having learnt my lesson, I patiently saved my film until my school’s annual sports day a few months later.   That’s when I brought out my camera again and I went down to the tracks where I shot pictures of all the races and proceeded to sell the instantly developed pictures to the winners for $5 a shot … and once again I was an instant star!

I Studied Photography As An Extra Curricular Activity At University

Throughout my days at high school I always made extra money with my camera.  I also joined the school’s camera club and the natural progression was that I joined the University Camera Club when I eventually went off to study at the University of the West Indies (UWI) in Jamaica.

I graduated from UWI with a Bachelor of Science double major in Geology and Chemistry, having won a Geothermal Engineering scholarship back when the St Lucia government wanted to use the steam from St Lucia’s drive in Volcano to produce electricity.  Alas the project was abandoned, having proven to not be economically viable –  which I discovered upon completion of my degree.  However quite by accident I shot a wedding at the Windjammer Hotel and the bride absolutely loved her pictures, couldn’t stop raving and I have never looked back since.

Now while Jill, the Windjammer bride, really loved her pictures it was a bad photo experience that taught me to create pictures the way I did for her wedding.
Here’s what happened…

When I was about 9 years old my little friend and I posed for some dude and it had to be my worst photo experience ever.  This guy had us hold a smiling pose for what seemed like hours while he fiddled with his camera.  In fact the experience was so bad that my face started to tremble and even today I hardly ever pose for pictures and when I do my face still breaks out in a tremble most of the time.

Now that I’m a photographer I look back and realize that Thom – we’ll call him that – had probably gotten a new camera, didn’t know how to use it and rather than practice alone at first, used us as his unsuspecting guinea pigs, to the detriment of my trembling face.

How My Photography Is Far Different From Thom’s

Well the first idea that I got that there was something quite different with my photography was in Jamaica when my friend Kim needed a picture in a hurry but couldn’t leave campus to get to the mall.  So I volunteered to shoot some pictures of her and she was blown away by the prints I returned, saying that she had never looked as good nor felt as relaxed in front the camera.
And it dawned on me that I had been extremely engaging with Kim and there was never a stiff moment as I had her going through a ton of poses while telling her how good she looked in just about every pose she struck.

As I analyzed Kim’s pictures and remembered her words that it never felt like a photo shoot and that she was totally relaxed, it hit me like a ton of bricks that having had that awful experience so many years ago I instinctively wanted to ensure that Kim was totally relaxed and never bored during the session.  I also realized that in subconsciously striving to achieve all of this Kim became engaged in her photo shoot to the point where it turned into a real fun experience that she was totally immersed in.  And so was born my secret weapon for amazing people pictures… and that was long before digital when you can see the screen and have instant feedback.

Today it’s even better as I let you see my camera screen and feed off just how good you look, which takes my photo sessions to a whole new level whether I’m shooting a wedding, kids frolicking about in a pool or I’m on a photo safari and showing you just what I’m capturing.  In fact I’ve now grown used to people telling me that they never enjoyed a photo session until shooting with me and that they never looked as good in a picture before.   Comments like these are priceless for me and the thing that drives my passion for photography the most.

After shooting weddings at Windjammer for a few years I got a call when Sandals Halcyon in St Lucia was at their wits ends with their photography provider.  I showed Sandals what I would do differently, was awarded the contract and proceeded to  produced all manner of photography for Sandals for the next 10 years until they took photography in house and cancelled all photography contracts.

While at Sandals my team and I shot about 600 weddings a year, produced all the resort’s guest photography and was commissioned to produce marketing photography for Sandals when they couldn’t fly in their regular photo crew.
In 1999 I switched from film to digital which opened a whole new world of creativity as now it was possible to engage brides and regular Sandals patrons in a way that was impossible before, by showing them their pictures on the camera’s LCD screen which always gets people super excited about their pictures…

Due to my science background I love to understand what makes things work.  As a result I continually attend training programs and photography workshops and it’s not unusual for me to jump on a plane and head off to the US to attend a trade show or photography workshop once I think that it will help me to make even better pictures than before.  Here’s a short list of some of what I’ve done, who I’ve worked with and where I’ve worked with them:

4.    With Canadian portrait photographer Mark Hamilton in the Dominican Republic